This sequel comes out even faster than Hollywood’s attempts. In my last post, I discussed the source of creative inspiration; an elusive concept to most of us. To explain it to you (and myself) I’ve included a few projects to illustrate where a creative spark emerged to solve a specific problem or request. Please note that these solutions didn’t necessarily come easily or quickly. They came from pondering and pursuing, creating and discovering. These solutions may not “wow” you or be profound examples. Perhaps knowing and being a part of the story makes me see how working through the process allowed for a creative idea to develop into something interesting. Each project has a much longer story, but I tried to be as brief as possible to explain one aspect of each project. If you read my blog regularly, that’s the best I can do.

Armburst Road House – This project is located on top of a hill adjacent to a wooded area to the East, this project lent an opportunity to address an impressive view while adding on to an existing house with much sentimental value to the Owner. The view to the South became the focus of the site planning process which was not immediately evident in our initial site strategy. This with the Owner’s request for a “tower” had my head spinning to come up with a viable solution. A tower…how was I supposed to incorporate a tower into a simple shed roof contemporary house? I realized I needed to give the qualities of a tower to the Owner without being overt in its rendering.

The project begins with a new entrance not existent in the original home. This narrow glass enclosed space mediates between two dominant forms of the existing and new addition. We felt that the new addition should leave the identity of the original structure intact and create its own presence on the site. When I relinquished the notion that the addition had to ‘touch’ the original house or worse be an extrusion of it, the best ideas started to flow.

The tower became a new upper (third) level devoted to a music and reading room to showcase the Owner’s musical instruments, book collection and serve as a private away room. It was also the key component of the exterior composition. The large windows from this room are placed to capture the spectacular view; a reinterpretation of the tower. Cues were taken from the original shed roof house but the addition is translated with a newer, modern rendering. Now the Owner can ascend up to a functional tower that looks out on their land and the beautiful distant view. 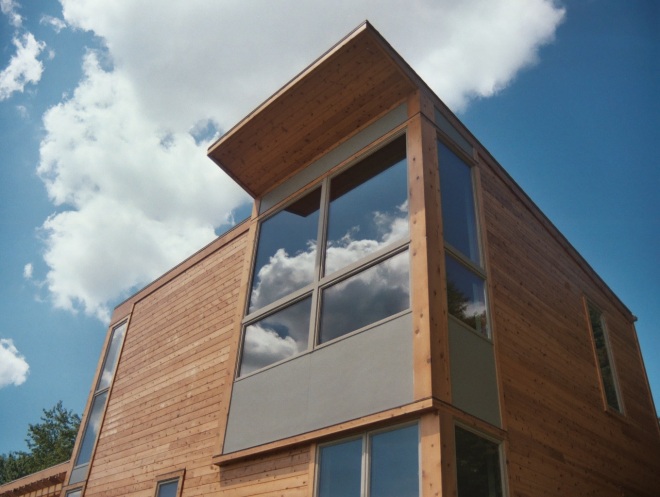 Dawson House – In a rural setting on a 185 acre farm sits this property where the Owner converted an old farm building many years ago into what was to be their temporary residence. They commissioned us to add onto the structure to provide better living space, an accessible master bedroom suite, an elevator for accessibility between floors and to provide a formal entrance to their home.

Their stated desire to “see” their farm, garden and surrounding area from within was one aspect that caught my attention. Respecting the context of the existing region by not making an all glass structure, we inserted tall windows at the north and south ends of the upper floor. Instead of merely inserting windows to ‘look out’ beyond, I thought what if one could be part of that view? So a simple idea emerged; extend the window from merely an opening to a glass enclosed projecting space towards the two principal views. Now when the Owner looks outside and scans their yard and farm, they can stand in this projecting window and feel connected to the outdoor space. 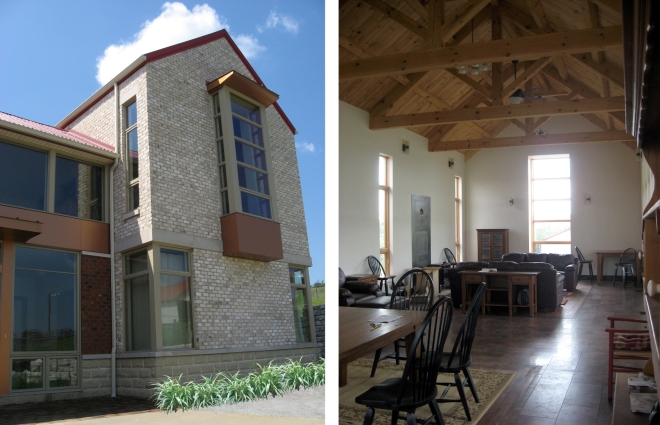 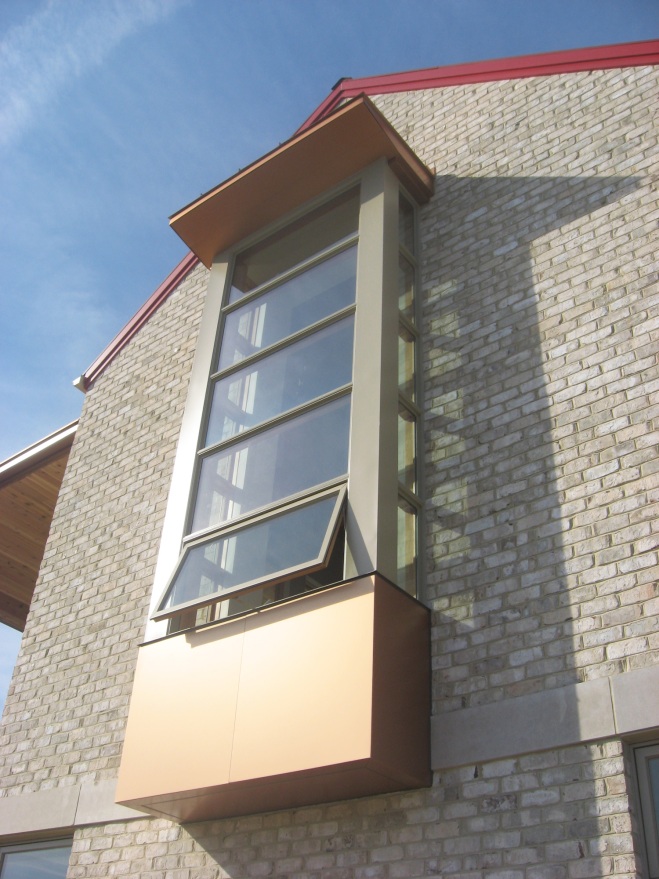 Ace Hardware – This former automobile dealership from 1926 is a well known landmark in downtown Greensburg, PA. The Owner, participating with a major hardware store chain, purchased an unoccupied building that had most recently served as an equipment rental store. Our concept was to celebrate the “hardware store” aspect of its new function while paying respect to the original structure. The budget was extremely thin so our few creative moves had to be simple and restrained. One of our modern insertions was a new canopy over a new main entrance. We thought about traditional canopies being fabric and associated that with the “fabric of hardware.” Thus a thin ‘fabric’ of aluminum was folded like a simple origami project to create a new canopy. It is suspended with exposed hardware celebrating the purpose of the store. The interior was stripped of past poor renovations to reveal the original plaster beams and ornate ceiling. A new storefront was carefully inserted into the existing wood framework. 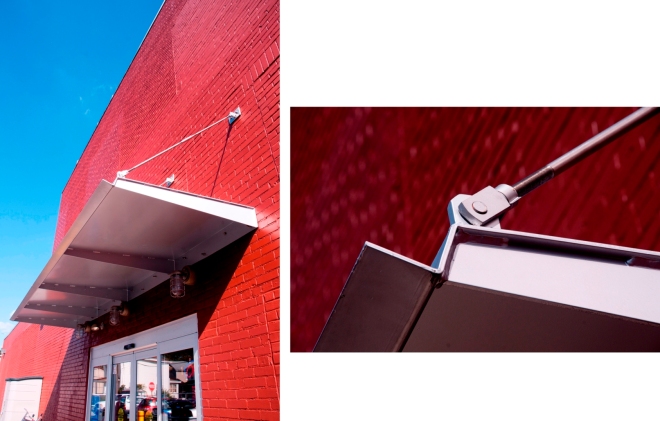 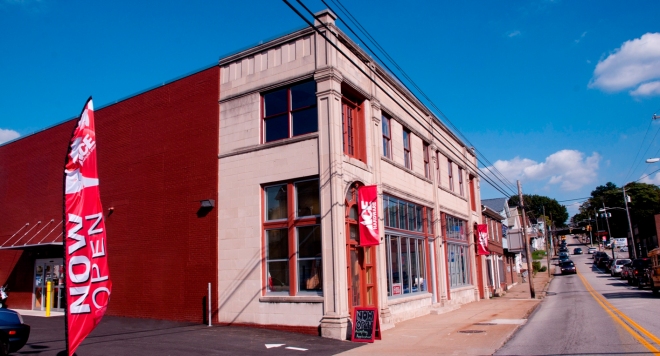 Three different projects each have their own creative solutions. Do they sound simple? Perhaps. Yet at the other end of the process, the path is never so clear. For creative inspiration I recommend not ruling out anything initially. Figure out what works and what things hinder your creativity. Sometimes it takes changing locations, pausing for a short time or even starting over. Not every solution is “inspiring” but hopefully they remain creative and useful to their respective owners and users. I’d love to hear about your creative solutions.

photos of armburst and dawson residences by lee CALISTI architecture+design